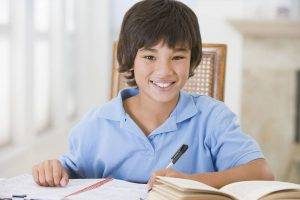 If a diagnosis of ADD or ADHD is under consideration or has already been given to a child or adult, it is essential to rule out undetected vision problems. This is so important because undetected vision problems can sometimes mimic the behaviors and symptoms of attention deficit disorders, such as ADD or ADD/ADHD. In many cases, because ADD and ADHD conditions are very familiar to the public, including pediatricians, teachers, and school nurses, children can be incorrectly diagnosed with ADD or ADHD, and put on medication or given educational interventions when, in fact, a treatable vision problem, such as poor eye tracking or convergence insufficiency, is actually the sole cause of the problems…and can be easily remedied with in-office non-surgical Vision Therapy.

In any case of suspected or diagnosed ADD or ADD/ADHD, visual problems that would not be picked up in a standard 20/20 eye chart test (Snellen chart), such as problems with eye movements, eye tracking and eye convergence (e.g., convergence insufficiency, lazy eye or strabismus) must be thoroughly evaluated, ruled out and/or treated. Our eye doctors are specialists in vision exams, visual evaluations, and the best vision treatment options for patients with suspected or diagnosed ADD ADHD and the other visual conditions mentioned.

Researchers at the American Academy of Optometry suggest that untreated vision problems, such as convergence insufficiency, may consume more of children’s “executive function” — that is, higher-order cognitive processes used to plan, organize, pay attention and manage time and space. Because ADHD is also marked by inattentiveness, impulsive behavior and hyperactivity — and kids who suffer from it also have trouble sitting, focusing and controlling their impulses — and the correlation between this and vision problems have been offered up in various forms by many different experts in various fields — it is recommended that parents make sure that their children are accurately screened/evaluated for convergence insufficiency many times that a diagnosis or misdiagnosis of ADHD is being considered. Dr. David Granet, a professor of ophthalmology and pediatrics at the University of California, San Diego, said: “Everyone is familiar with ADHD and ADD, but not with eye problems, especially not with convergence insufficiency. But we don't want to send kids for remedial reading and education efforts if they have an eye problem. This [convergence insufficiency eye testing] should be part of the protocol for eye doctors.” “When five of the symptoms of A.D.H.D. overlap with C.I. (convergence insufficiency),” said David B. Granet, MD FACS FAAP, “how can you not step back and say, Wait a minute?” Quote taken from ADD-ADHD.ORG.

According to a very large multi-site scientific study done by the National Institutes of Health/National Eye Institute (one of the study sites included Mayo Clinic), in-office vision therapy is the proven best treatment for a common childhood vision disorder called convergence insufficiency. The multi-site, multi-million dollar scientific study found that after 12 weeks of therapy, 75 percent of children who were given the office-based (eye doctor supervised) vision therapy along with at-home reinforcement (vision therapy homework) achieved a normal vision result or had significantly fewer symptoms of Convergence Insufficiency.

Given the overlap or confusion between ADHD and Convergence Insufficiency that is reported by many experts, it is wise to explore whether Vision Therapy would be an effective treatment for a child or adult with diagnosed or misdiagnosed or suspected ADD/ADHD. Vision Therapy is a proven method of improving eye movements, eye tracking, and eye convergence and can be an alternative or adjunct to medication, biofeedback, or behavior modification for diagnosed or suspected ADD/ADHD.

In a recent peer-reviewed scientific study at Tel Aviv University in Israel, researches found strong evidence that involuntary eye movements are an indicator of Attention Deficit Hyperactivity Disorder (ADHD). Researchers used an eye-tracking system to monitor the eye movements of two groups of adults in conjunction with an ADHD diagnostic test called TOVA.

One group of study subjects, who had previously been diagnosed with ADHD, took the test twice: once without medication and again when under the influence of methylphenidate, a drug commonly used to control symptoms of ADHD. The second group of adults — not diagnosed with ADHD — served as the control group and did the eye-tracking test without medication. The results found a direct correlation between ADHD and the inability to control eye movement in the anticipation of visual stimuli.

On the subject of eye tracking, eye movements, and ADHD diagnosis, Dr. Glen Steele, AOA InfantSEE™ committee chair said, “Optometry has always stated that eye movements are linked to reduced attention, often leading to a misdiagnosis of ADHD,” Dr. Glen Steele emphasizes, “This study [the Tel Aviv eye tracking study] furthers the understanding that eye movements are linked and should be addressed.” Dr. Steele continues, “The control of eye movements is foundational for everything an individual might do in life and if compromised, it can lead to reduced ability and function.” Dr. Steele advises, “Parents of children with suspected attention disorders should be encouraged to have their children undergo a comprehensive vision examination by an optometrist in order to determine the extent that vision might play in the overall process.”

To learn about vision problems which can overlap or be misdiagnosed as ADD/ADHD, see our pages on: